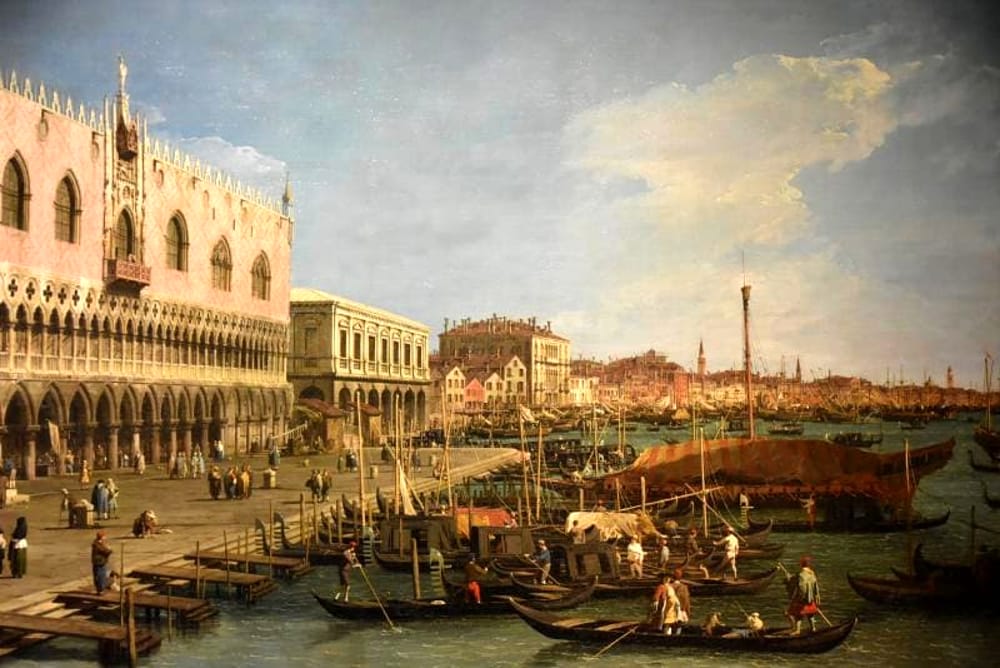 From February 23 to June 9, the exhibition dedicated to the great Venetian painter Giovanni Antonio Canal, known as il Canaletto, will be held in Palazzo Ducale – Appartamento del Doge.

Eighteenth-century Venice with its lights and shadows unfolds through the rooms of Palazzo Ducale, in the story of an extraordinary century and its protagonist: Giovanni Antonio Canal, Canaletto.
This was a period of great complexity and value, of excellence in the fields of painting, sculpture and decorative arts. From its beginning, the eighteenth century showed itself to be a century of enormous vitality and great changes: in the language of art, in the history of ideas and techniques, in social life.
The exhibition starts from an overview of the early years of a new artistic form, which broke the bonds with the rigour of classicism and with the theatricality of the baroque, while colour began to take precedence over line. Luca Carlevarijs laid the foundations of Venetian vedutismo, while Rosalba Carrera renewed the art of portraiture. Two young artists of the same generation began painting works in which light acquires a founding, constructive value: in both Giambattista Tiepolo with his aggressive brushstrokes in dynamic compositions, and Canaletto in the painting views, their style would become more controlled and sharper.
The voyage continues with the genre painting of Pietro Longhi, the explosion of vedutismo, the rise of history painting and of landscape, together with that of the capriccio. And this was a great season for engraving too, with which many artists experimented, and of Giambattista Piranesi. The story of this century is also that of a European presence in the Serenissima and of its home-grown artists venturing abroad. The glass art of Murano was also living through a period of glory, as was the making of jewellery and porcelain.
The protagonists of the turn of the century were Francesco Guardi and Giandomenico Tiepolo, son of Giambattista. In Guardi’s vision, his pictorial style, quivering and allusive, was far removed from the sunny certainties of Canaletto, and seemed to evoke a Venice in decay, while the years of carefree and aristocratic lifestyle gave way to a people of irreverent Pulcinellas, where everyone was free and equal, with the revolution burning in France in the background. The century of enlightenment, and the exhibition itself, closed with the emergence of Neoclassicism, dominated by the giant that was Antonio Canova.
(source palazzoducale.visitmuve.it)
+ Google Calendar+ iCal Export