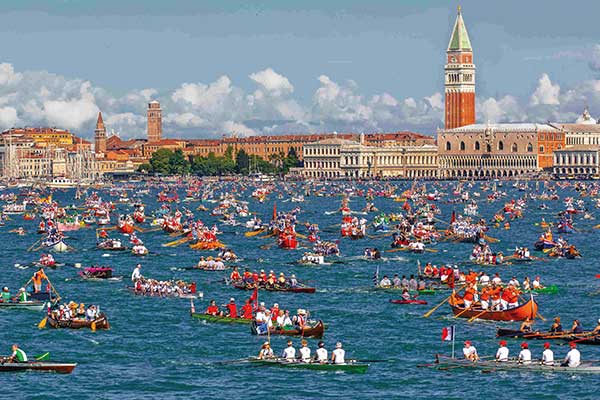 The Vogalonga is an appointment that is repeated every year, from 1975, between May and June: a regatta of non-competitive rowing boats. The official date of the 46th edition of the Vogalonga is set for May 31, 2020.

The event was born recently, from the idea of ​​some Venetian characters who wanted to organize a friendly regatta in protest against the degradation of Venice and the wave motion. So they tried to involve the Venetian rowing enthusiasts, at the time few because of the tendency towards motor boats, to realize a 30 km race, in a long route that extends not only to Venice but to the edge of the North Lagoon.

The first edition of 1975 took place on the occasion of the Festa della Sensa, with 500 boats and 1500 participants.

The San Marco basin is filled with many typical boats, different in color and shape, such as gondolas, sandolo, mascareta, caorlina, topa, peata, vipera, s’ciopon.

In a few years, the event has managed to thrill the population, leading to the birth of over fifty rowing companies and arriving to have more than 2000 boats with over 7500 rowers, both from Italy and abroad.